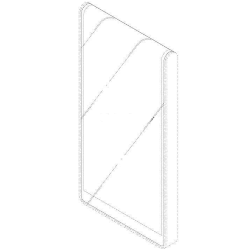 About 10-days ago, we told you that LG had received a patent for a foldable phone. LG has just continued that trend by filing two more patents. The two recent patents have been filed in the U.S. under the patent numbers US D777,131 S and US D777,132 S. Both the patent numbers apply directly to smartphones.

The first image shows us one side of this smartphone, and as you can see, the device has a curved display on the top, along with a really thin bezel below its display. The second image shows the other side of this phone, and you will notice that this device comes with a display on both its front and back sides, while it’s also present on the very top of this phone, as we are not looking at two separate displays, but a single wrap-around one. You will also notice a circular key in the second image, this is probably a fingerprint scanner and a home button, though nothing has been confirmed, of course.

Looking at this design, we wonder how durable would this smartphone be, especially considering the fact that its display covers the top portion of the phone as well, so a fall would probably shatter it, well, it almost certainly would. This sure is an interesting design, but it remains to be seen what LG do with it, if they plan to use it in one of the upcoming phones, of course.

The patent’s existence doesn’t prove that LG will ever release a smartphone like this, but it is refreshing to see the company conceptualizing new phones that use cutting-edge technology. We are pretty sure LG will find a way to surprise us when the time for such adventurous products is right. That will not be too far off in the future, considering the flexible displays are ready for production.