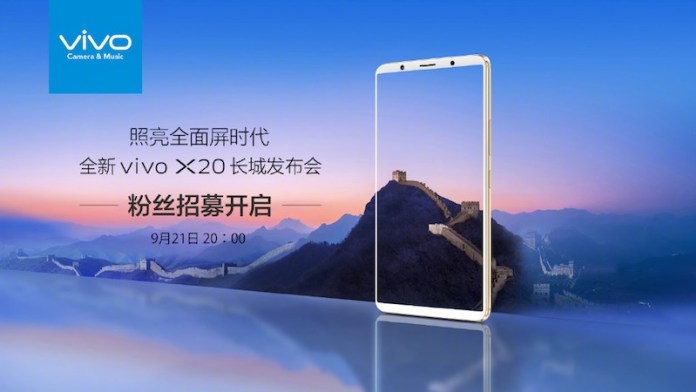 Vivo – the Chinese smartphone manufacturer has started sending out invites for the launch event of its latest Vivo X20 Smartphone, which was previously spotted in a FIFA World Cup 2018 poster. Along with the release date, the phone’s specification and features have also leaked. The main highlight of the phone is that it will be powered by the Qualcomm Snapdragon 660 processor. According to the rumors, the newly unveiled handset comes with truly bezel-less design and carries a model number of Vivo X20 and X20A. The reports also suggested that the phone will come with a dual camera setup at the back of the device, which is quite similar to the iPhone 7 Plus camera orientation. There is also a fingerprint sensor for added security, which will be placed at the back of the device.

As I mentioned earlier, the phone will be powered by the Snapdragon 660 processor, which is having a clock frequency of 2.2 GHz. And the phone will run on the seventh generation Android 7.1.1 Nougat operating system out of the box. It is also expected that the phone will also come in Vivo X20 Plus version and features a 5.5 inches Full HD display, which carries the support for 1080 x 1920 pixels. While the Vivo X20 will comes with a smaller 5.2 inches screen with the same resolution.

On the storage front, the rumors suggested that the phone will pack 6 gigabytes of RAM plus either a 64GB or 128GB of built-in storage. On the camera department, the phone has supposed to come with 24 megapixel front facing camera. The smartphone will pack a 3,500 mAh battery capacity. For further information and details, we have to wait until the company has launched Vivo X20 Smartphone officially.