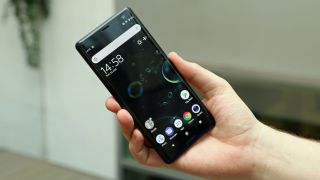 For now, there is no information about the price and availability of the Sony Xperia XZ4 smartphone.